This guide will explain what type of entity an LLC is, how it compares to other structures, and whether it’s the right structure for you. 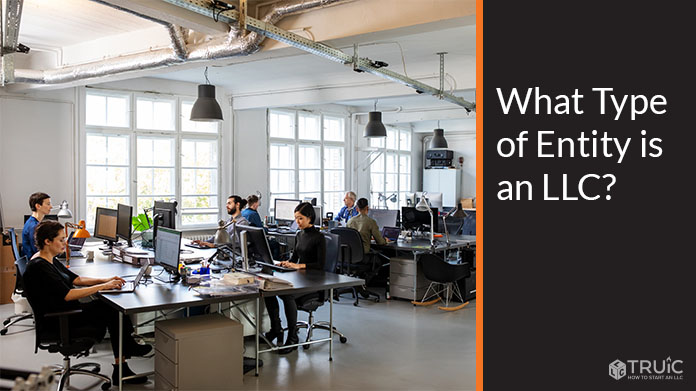 Even though you may be able to alter your business entity in the future, this possibility is not guaranteed (depending on your state) and may even involve several complications that will ultimately halt (or significantly prolong) your transitionary period.

Limited liability companies (LLCs) are a hybrid structure that have become increasingly popular with small businesses. This is because they allow business owners to experience most of the structural and managerial advantages of sole proprietorships and partnerships while still enjoying the legal benefits of a corporation.

Limited personal liability (also known as the corporate veil) refers to the legal concept where LLC owners are not personally liable for any debts incurred by their businesses.

If an LLC happens to become insolvent in the future, the business owner’s personal assets (e.g., vehicles, savings accounts, homes, etc.) will all be “out of the hands” of any previous financiers and lenders.

As an LLC’s profits are “passed through” by default, the business’s owners are not subject to double taxation in the same way that a corporation is. All profits are funneled directly to the owner(s) of an LLC in accordance with the company’s operating agreement. The owners then pay taxes on their individual tax returns.

LLCs are one of the most flexible business structures when it comes to taxes.

Subject to the owners’ eligibility, LLCs can elect to be taxed as:

Each tax structure has different advantages and disadvantages, and your ability to elect them will ultimately depend on the number of owners in your LLC and on your location ( as some states do not recognize S Corp status).

Regardless, increased tax flexibility can be very beneficial if you are unsure about how your company will progress in the future and want to keep your options open.

Other benefits of LLCs include:

From a financial standpoint, the financial and structural flexibility that LLCs are privy to is perhaps one of their strongest selling points. If you are looking to launch your business but are currently unsure of the number of partners or the amount of capital that you may require in the long term, you may want to register your business as an LLC.

Sole proprietorships are the most common business entities according to the Small Business Administration (SBA). Traditionally, this has primarily been because they require a very low amount of legal action to set up and are not subject to much (if any) government scrutiny.

However, the increasing prevalence of simple, low-cost business formation services may mean that more small businesses will migrate towards more formal business structures like LLCs or corporations.

Despite their popularity, sole proprietorships do come with a few disadvantages:

Sole proprietorships may be a good choice for solo practitioners, as well as for persons who are not sure about the longevity or potential of their business idea and would like to give it a go without needing to satisfy several legal requirements or filling out large amounts of paperwork.

Similar to sole proprietorships, a partnership is one of the most straightforward and non-complex business entities out there.

There are several different partnerships:

There are many different kinds of corporations:

A C corp (also known as a corporation) is a separate legal entity to its owners. This means that corporations can:

This means that the shareholders of a C corp are sometimes required to pay taxes twice on the same stream of revenue (commonly known as “double taxation”) as the company’s profits are taxed once at a corporate level (21%) and then for a second time on the shareholders’ personal returns (i.e., following the distribution of dividends).

All in all, C corps offer the highest level of protection for their owners, but this comes at an opportunity cost of higher startup costs, increased government scrutiny, and tighter restrictions.

C corps can also raise capital significantly more easily than sole proprietorships, partnerships, and LLCs because they have the option of selling stock. This also commonly means that attracting external investment is easier when operating as a corporation.

An S corp is a type of tax classification that can allow corporate and LLC business owners to escape a few of the drawbacks of C corps (e.g., double taxation, etc.) while maintaining most of the financial and structural benefits involved. This is because S corps allow company profits and losses to be passed through directly to its owners without being subjected to corporate tax at a federal level first.

According to the Internal Revenue Service (IRS), individuals wanting to elect S corp status need to satisfy the following requirements:

Despite its many convenient benefits, S corps are still subject to heavy government scrutiny (at least in comparison to LLCs, partnerships, and sole proprietorships) and require business owners to satisfy numerous legal requirements and managerial duties.

Consequently, an S corp is likely to be a good choice for you if you have already decided to register your business as a C corp but are eligible for S corp status per the IRS.

You should also keep in mind that the value of an S corp status can vary significantly depending on your state, with some states entirely refusing to acknowledge it.

A B corp is a business entity that incorporates a “public benefit” element into its operations while maintaining a virtually identical tax structure to C corps.

The shareholders of a B corp are expected to be able to produce evidence of a sort of public benefit that they achieved in conjunction with their profit. Depending on the state, shareholders may be required to submit “benefit reports” annually to demonstrate this.

Even though there are many B corp certification services, none are required for a company’s registration, and so these remain entirely optional.

Nonprofit corporations are business structures made to further a particular social cause (which achieves a public benefit) and so can attain tax-exempt status under section 501(c)(3) of the Internal Revenue Code.

These social causes commonly relate to:

Even though nonprofit corporations retain an almost identical structure to that of C corps when it comes to how they are run, they do have a few differences (both in how they are launched and in how they can be run).

Nonprofit organizations are required to:

The reasoning behind this stems from the belief that because nonprofits engage in activities that provide a social benefit to society, they should receive tax-exempt status in order to be more accessible and desirable.

A close corporation is similar to a B corp. However, it doesn’t follow a “traditional” corporate structure and can be run (and managed) in a way that is usually seen in other corporate entities which are better suited for smaller businesses.

Depending on the state, for example, close corporations may not be allowed to sell their stock publicly. Moreover, they are allowed to be run without a board of directors.

Depending on the state, management style, and the number of owners, LLCs can be taxed as C corps, S corps, or even nonprofits.

However, these are much more uncommon as they are very complex and involve significant legal formalities to set up.  If you are interested in adopting a “non-conventional” business structure for your company, you will likely benefit from talking to either a general business or a tax attorney beforehand.

Should I Register My Business as an LLC?

Your ideal business entity is dependent on your particular industry, management style, capital, and available time.

Regardless, LLCs do seem to offer a sort of “best of both worlds” option. As we have seen above, they provide:

When it comes to forming your LLC business, the degree of paperwork involved will also (to some extent) be up to you.

Even though you should undoubtedly draft an operating agreement (both for practical and legal reasons), this can be quite short in length, and there is no legal rule that relates to how you can manage your LLC on a daily basis (e.g., no annual meetings are required, etc.). This is contrary to some of the other limited liability structures like C corps.

Ultimately, you should consider whether your business is of an adequate enough size to make the benefits of running an LLC worth it from a monetary standpoint. This will unlikely be the case for extremely small businesses or side hustles.

The corporate veil refers to the legal doctrine through which corporate entities are differentiated from their owners and shareholders under the law.

This means that shareholders are:

This benefit is not absolute, however, and (if need be) the US courts are able to fully disregard this separate entity concept  (known as “piercing the corporate veil”) and prevent owners of incorporated structures from benefiting from limited personal liability.

The exact standards for when courts will be happy to pierce a corporate veil are not entirely understood. Nevertheless, common law in the US has repeatedly shown that courts are generally strongly against “piercing” the corporate veil, as they believe that it encourages the development of business ideas and increases market diversification, and so will only do so where there has been very serious and unconscionable conduct.

This could relate to:

Simply put, the notion of limited liability (and all other corporate veil benefits)  is generally subject to a legal doctrine that demands honesty and good faith when it comes to using corporate privileges for legitimate ends.

How do I register as an LLC?

Setting up an LLC is generally very simple:

For a more in-depth guide, check out our state-specific Form an LLC guides.

What business entity is right for me?

The best business entity for you will undoubtedly be dependent on your specificities (e.g., managerial style, location, industry, sector, etc.).

You will need to review the benefits and disadvantages of each structure and consider which would be ideal for your particular circumstances and future aspirations.

Can I form my LLC in any state?

In legal terms, there is nothing stopping you from registering your company in any state within the US, even if it is not your state of residence.

For practical reasons, however, you will likely want to register in your home state. This can allow you to:

These include but are not limited to:

Are LLCs beneficial for small businesses?

Yes. Limited liability companies can be ideal for small business owners because they are easy to set up, relatively inexpensive, and allow for a high degree of flexibility which can be very convenient if you are looking to expand in the near future.