The rules for starting and running a Florida limited liability company (LLC) are laid out by Florida's LLC laws.

In this guide, we offer simple explanations to Florida LLC laws about:

To learn more about starting an LLC, visit our form an LLC guide. 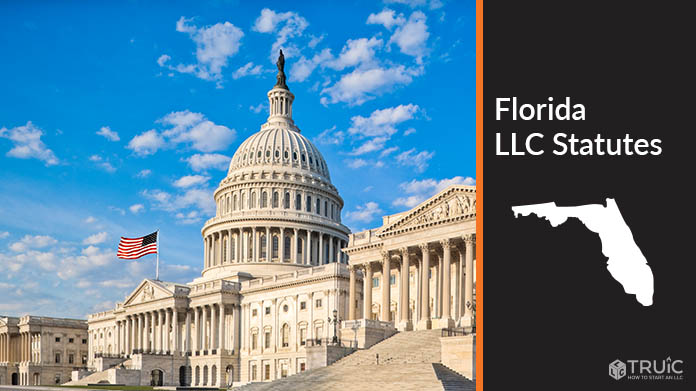 The following items regarding LLC formation are from the Florida Revised Limited Liability Company Act:

(1) One or more persons may act as authorized representatives to form a limited liability company by signing and delivering articles of organization to the department for filing.

(2) The articles of organization must state the following:

(b) The street and mailing addresses of the company’s principal office.

(c) The name, street address in this state, and written acceptance of the company’s initial registered agent.

(3) The articles of organization may contain statements on matters other than those required under subsection (2), but may not vary from or otherwise affect the provisions specified in s. 605.0105(3) in a manner inconsistent with that subsection. Additional statements may include one or more of the following:

(a) A declaration as to whether the limited liability company is manager-managed for purposes of s. 605.0407 and other relevant provisions of this chapter.

(b) For a manager-managed limited liability company, the names and addresses of one or more of the managers of the company.

(c) For a member-managed limited liability company, the names and addresses of one or more of the members of the company.

(e) Any other relevant matters.

The statute provides the requirements for setting up (or forming) an LLC. The State of Florida offers online and mail-in LLC filing to meet these requirements.

Florida LLC laws define the duties and appointment of the LLC registered agent.

The following excerpts regarding registered agents are from the Florida Revised Limited Liability Company Act:

(a) A registered office, which may be the same as its place of business in this state; and

(b) A registered agent, who must be:

1. An individual who resides in this state and whose business address is identical to the address of the registered office;

2. Another domestic entity that is an authorized entity and whose business address is identical to the address of the registered office; or

3. A foreign entity authorized to transact business in this state that is an authorized entity and whose business address is identical to the address of the registered office.

(3) The duties of a registered agent are as follows:

(4) The department shall maintain an accurate record of the registered agent and registered office for service of process and shall promptly furnish information disclosed thereby upon request and payment of the required fee.

(6) For the purposes of this section, “authorized entity” means:

(a) A corporation for profit.

(b) A limited liability company.

A registered agent’s job is to accept service of process (legal summons to a lawsuit).

A Florida registered agent must:

Learn how to choose the best registered agent for your LLC.

The following excerpts regarding operating agreements are from the Florida Revised Limited Liability Company Act:

members of a limited liability company, including a sole member, concerning the matters described in s. 605.0105(1). The term includes the operating agreement as amended or restated.

(1) Except as otherwise provided in subsections (3) and (4), the operating agreement governs the following:

(b) The rights and duties under this chapter of a person in the capacity of manager.

(d) The means and conditions for amending the operating agreement.

(2) To the extent the operating agreement does not otherwise provide for a matter described in subsection (1), this chapter governs the matter.

(3) An operating agreement may not do any of the following:

(c) Vary the requirement, procedure, or other provision of this chapter pertaining to:

2. The department, including provisions pertaining to records authorized or required to be delivered to the department for filing under this chapter.

(g) Relieve or exonerate a person from liability for conduct involving bad faith, willful or intentional misconduct, or a knowing violation of law.

(h) Unreasonably restrict the duties and rights stated in s. 605.0410, but the operating agreement may impose reasonable restrictions on the availability and use of information obtained under that section and may define appropriate remedies, including liquidated damages, for a breach of a reasonable restriction on use.

(p) Provide for indemnification for a member or manager under s. 605.0408 for any of the following:

2. A transaction from which the member or manager derived an improper personal benefit.

3. A circumstance under which the liability provisions of s. 605.0406 are applicable.

4. A breach of duties or obligations under s. 605.04091, taking into account a restriction, an expansion, or an elimination of such duties and obligations provided for in the operating agreement to the extent allowed by subsection (4).

(4) Subject to paragraph (3)(g), without limiting other terms that may be included in an operating agreement, the following rules apply:

(a) The operating agreement may:

1. Specify the method by which a specific act or transaction that would otherwise violate the duty of loyalty may be authorized or ratified by one or more disinterested and independent persons after full disclosure of all material facts; or

(c) If not manifestly unreasonable, the operating agreement may:

2. Identify specific types or categories of activities that do not violate the duty of loyalty;

3. Alter the duty of care, but may not authorize willful or intentional misconduct or a knowing violation of law; and

4. Alter or eliminate any other fiduciary duty.

(5) The court shall decide as a matter of law whether a term of an operating agreement is manifestly unreasonable under paragraph (3)(f) or paragraph (4)(c). The court:

(a) Shall make its determination as of the time the challenged term became part of the operating agreement and shall consider only circumstances existing at that time; and

(b) May invalidate the term only if, in light of the purposes, activities, and affairs of the limited liability company, it is readily apparent that:

1. The objective of the term is unreasonable; or

2. The term is an unreasonable means to achieve the provision’s objective.

(8) A written operating agreement or other record:

1. If the person or a representative authorized by that person orally, in writing, or by other action such as payment for a limited liability company interest, executes the operating agreement or another record evidencing the intent of the person to become a member or transferee; or

(1) An operating agreement may specify that its amendment requires the approval of a person who is not a party to the agreement or upon the satisfaction of a condition. An amendment is ineffective if its adoption does not include the required approval or satisfy the specified condition.

(a) Is effective with regard to a debt, obligation, or other liability of the limited liability company or its members to the person in the person’s capacity as a transferee or person dissociated as a member; and

(b) Is not effective to the extent the amendment imposes a new debt, obligation, or other liability on the transferee or person dissociated as a member.

(4) Subject to subsection (3), if a record delivered to the department for filing which has become effective under this chapter but conflicts with a provision of the operating agreement:

(a) The operating agreement prevails as to members, dissociated members, transferees, and managers; and

An LLC operating agreement allows LLC members to create rules for how their unique LLC operates. These rules are often called “terms” or “provisions.”

When an operating agreement is in place, it’s easier to navigate situations involving the operation of the LLC. And, if a lawsuit or dispute arises, LLC members (or the courts) have something to reference.

If a dispute arises that can’t be resolved by LLC members and there isn’t an operating agreement, the courts will use LLC statute to resolve disputes.

Use our free operating agreement template or learn more with our What Is an Operating Agreement guide.

Florida LLC laws set out the requirements for annual LLC reporting. The State of Florida has created the Sunbiz annual report online portal to allow for easy reporting.

The following excerpts regarding operating agreements are from the Florida Revised Limited Liability Company Act:

(b) The street address of its principal office and its mailing address.

(c) The date of its organization and, if a foreign limited liability company, the jurisdiction of its formation and the date on which it became qualified to transact business in this state.

(d) The company’s federal employer identification number or, if none, whether one has been applied for.

(e) The name, title or capacity, and address of at least one person who has the authority to manage the company.

(f) Any additional information that is necessary or appropriate to enable the department to carry out this chapter.

(2) Information in the annual report must be current as of the date the report is delivered to the department for filing.

(4) If an annual report does not contain the information required in this section, the department shall promptly notify the reporting limited liability company or registered foreign limited liability company. If the report is corrected to contain the information required in subsection (1) and delivered to the department within 30 days after the effective date of the notice, it is timely delivered.

(6) A limited liability company or foreign limited liability company that fails to file an annual report that complies with the requirements of this section may not maintain or defend any action in a court of this state until the report is filed and all fees and penalties due under this chapter are paid, and shall be subject to dissolution or cancellation of its certificate of authority to transact business as provided in this chapter.

(7) The department shall prescribe the forms, which may be in an electronic format, on which to make the annual report called for in this section and may substitute the uniform business report pursuant to s. 606.06 as a means of satisfying the requirement of this chapter.

(8) As a condition of a merger under s. 605.1021, each party to a merger which exists under the laws of this state, and each party to the merger which exists under the laws of another jurisdiction and has a certificate of authority to transact business or conduct its affairs in this state, must be active and current in filing its annual reports in the records of the department through December 31 of the calendar year in which the articles of merger are submitted to the department for filing.

(9) As a condition of a conversion of an entity to a limited liability company under s. 605.1041, the entity, if it exists under the laws of this state, or if it exists under the laws of another jurisdiction and has a certificate of authority to transact business or conduct its affairs in this state, must be active and current in filing its annual reports in the records of the department through December 31 of the calendar year in which the articles of conversion are submitted to the department for filing.

(10) As a condition of a conversion of a limited liability company to another type of entity under s. 605.1041, the limited liability company converting to the other type of entity must be active and current in filing its annual reports in the records of the department through December 31 of the calendar year in which the articles of conversion are submitted to the department for filing.

You can file your Florida annual report online.

Your Florida LLC annual report must state the following information (and must be current as of the date of filing):

*This information is provided for educational and entertainment purposes only. Please consult a lawyer for legal advice.

How to Start a Business in Florida

How to Start an LLC in Florida

How to File a DBA in Florida

How to Start a Corporation in Florida

How to Start a Nonprofit in Florida

What is an LLC?

What is a Registered Agent?