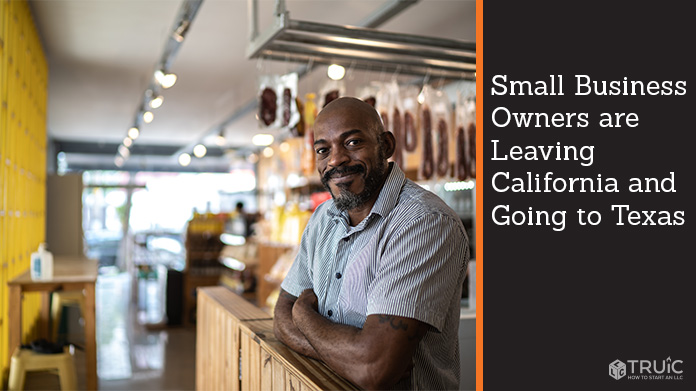 Small businesses are fleeing the state of California and relocating to greener pastures in other states, particularly Arizona, Florida, and Texas. The flight has become so pronounced it’s been called the anti-California Dream and was recently labeled the mass tech exodus as more businesses continue to leave the Bay Area for Texas. The Wall Street Journal was moved to do an opinion piece on the development, with the dramatic title — The Great Migration Out of California. The exodus includes larger companies, as well. In 2014, Toyota started moving house to Texas. In late 2019, financial services company Charles Schwab announced its decision to do the same.

The trend continued in 2020 when Hewlett-Packard decided to make the 1,900-mile trek to Spring, Texas. Oracle is following. The company is relocating to Austin, Texas. Also, while Tesla will continue to have a large footprint in California, the company is moving some operations to Texas. It plans to build a new factory in Austin. The Tesla boss, Elon Musk, is also moving to Texas. He will join a number of leading figures in the business and financial world that have already deserted California. The list includes Oracle’s Larry Ellison, Dropbox CEO Drew Houston, and Palantir co-founder Joe Lonsdale.

The reason for saying goodbye to California is financial. It’s costly to do business in the state, and it’s becoming increasingly more so. Moreover, the cost of living in California is also high, and the population is decreasing. From a micro perspective, it makes sense to move to Texas. But, the bigger picture is not as clear-cut. Taxes in Texas are less than in California. But, the Lone Star state takes money from the federal government to fund many programs. California, on the other hand, contributes to federal coffers. It may well be that Texas’ business advantage is being funded, in part at least, by California.

California has been hemorrhaging small businesses over the past ten years. A recent study, ominously named "It's Time for Companies to Leave California's Toxic Business Climate," estimates that around 13,000 businesses have left the state in the past. They’ve relocated mostly to Texas but also to Arizona, Colorado, Florida, Georgia, Nevada, North Carolina, Oregon, Virginia, and Washington. In 2016, for instance, some 1,800 companies cut ties with California, with 299 of those departures making Texas their new home.

The reasons most often cited are California’s animosity toward business and its market meddling. For instance, San Francisco’s approach to business is the opposite of what innovation and entrepreneurship require. The fourth-largest city in California has placed restrictions on delivery robots, electric-scooter companies, facial-recognition technology, food-delivery apps, home-rental services, ride-hailing firms, and other novel technologies. It has created an Office of Emerging Technology, an agency that is mandated to approve only new products that provide a “net common good.”

After Hawaii, California Has the Highest Cost of Living

Compounding these woes is California’s high cost of living. After Hawaii, California has the highest cost of living. Finding somewhere to live at a reasonable price is difficult. The average price of a home in the state is $1.2 million. Renting is equally costly. In January 2020, the average monthly rent in Los Angeles was $2,545, while the nationwide average was $1,463.

Yet, San Francisco seems intent on placing restrictions on new housing development. For instance, it continues to maintain a 40-foot height limit in large areas of the city. Although, there are exceptions like the 1,070 Salesforce tower. Building up to New York City’s 50-foot limit could double housing accommodation very quickly.

The high cost of housing not only drives up living costs, it makes it difficult for workers to find affordable accommodation. Additionally, it drives up labor costs. If businesses are to attract the right talent, they must pay enough to cover their housing and other living expenses.

Another issue that impacts business viability is the erosion of the state’s consumer base. The high cost of living is driving Californians to migrate to less expensive domiciles.

Taxes in California are high and at one time looked as if they would go even higher. The state has the eighth-highest corporation tax rate in the nation: a flat tax of 8.84%. The top marginal income tax rate is 13.3%. There was a possibility it would go up to 16.3%, but the bill to do so — AB 1253 — did not pass.

Open Arms to Business in the Lone Star State

In contrast, Texas has no income tax either for individuals or corporations. The state does, however, impose a corporate franchise tax, which is capped at 1%. Wholesale and retail companies, for example, pay just 0.5% franchise tax.

Texas undoubtedly has its attractions. It bills itself as the state where liberty lives. For nine years, from 1836 to 1845, it was an independent republic. Many in Texas still seem to think it has that sovereign status. But, there’s more to Texas than a rebellious attitude. Its business-friendly environment has been actively promoted. Over the past decade, the state has led the nation in the business of creating jobs. Its economy is the 9th largest in the world, and Texas’ population is the fastest-growing in America.

The irony is that California, apart from the loss in businesses and inhabitants it has been incurring, may be paying for Texas’ success in another way. About 90% of federal revenue is derived from the income taxes paid by individuals and the payroll taxes for social security, Medicare, and unemployment insurance. The rest comes from income taxes on corporations and excise taxes. This means that a state like Texas that has no individual income or corporation tax has very little to put in the federal kitty. In fact, Texas usually doesn’t have enough money to fund its own budget responsibilities. In 2019, for instance, the state received $19.5 billion from the federal government. That same year, California contributed $6.7 billion to federal coffers.

Finally, there’s a distinct possibility that what was gained on the roundabouts is being lost on the swings. In February 2020, a winter storm caused millions of Texans to lose electricity with devastating results. On February 16, at least 4.5 million customers in Texas were without power. The crisis affected all sources of power. The state’s grid operator, the Electric Reliability Council of Texas (ERCOT), reports the following as sources of power:

The calamity might have been avoided. A decade ago, federal regulators advised the state to “winterize” its power plants. There was little else they could do. In 2002, Texas freed itself from federal oversight and the mandates on safety and preservation of infrastructure that go along with such supervision. In return, it hoped for the cheaper power that increased competition in a deregulated market would bring. Whether this was achieved is not certain; The Wall Street Journal found that Texas Electric Bills Were $28 Billion Higher Under Deregulation.

However, price competition may have given the dozens of power plants that sprang up little financial incentive to invest in weather protection and maintenance. The state’s hands-off approach to regulation was meant to lower energy costs. However, as this catastrophe shows, while a market economy is obviously a good thing, a market society (one that only considers those factors of governance that can be expressed in money terms) is less so.