And What You Can Learn From Them

Some of the world’s most successful businesses were started by entrepreneurs with little money and almost no experience. What they have in common isn’t just a good idea; it’s the creative thinking skills and adaptability to roll with the punches. We’ve compiled a list of 18 of the most inspiring business success stories from tech giants to wildly successful wellness businesses that will inspire and motivate you toward creating a successful business of your own. 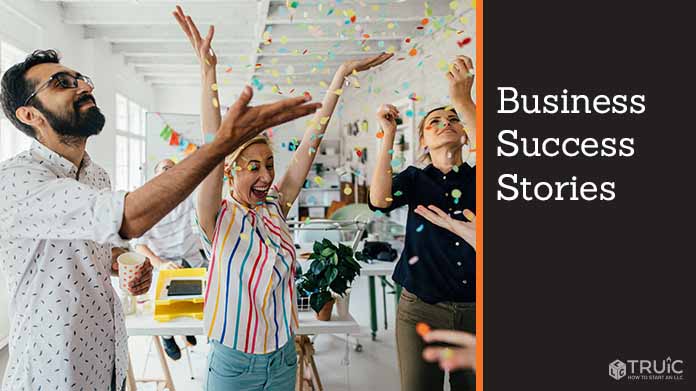 The popular genomics company 23andMe was started by Anne Wojcicki in 2006 with the intention of giving customers agency over their own health. Wojcicki faced many challenges along the way, including losing the ability to sell and market their products from the FDA until 2015. Today, 23andMe has expanded to offer customers tests for breast cancer, prostate cancer, and ovarian cancer, as well as their classic genetic tests, proving that hard work and patience can pay off.

To start Instagram (originally named “Burbn”), Kevin Systrom, a 27-year old Stanford Graduate, spent nights and weekends learning to code while concurrently working a full-time job in Silicon Valley. When Instagram was finally launched on iOS in 2010, the app gained 25,000 users in one day, and more investors began to take an interest. The business grew into the top photo-sharing application, and Systrom sold the company to Facebook just two years later for $1 billion.

The idea for Airbnb, the now widely successful home-sharing platform, was met with a lot of criticism. That didn’t stop founder Brian Chesky from following his entrepreneurial instincts and making Airbnb a reality by raising $120 million in funding. The business is now worth over $18 billion with listings in over 100,000 cities worldwide, a testament to pursuing a great idea despite outside skepticism.

Originally a coffee cart, Blue Bottle Coffee was started in the early 2000s with the intention of home delivering small-batch roasted coffee within 24 hours of roasting. Today, founder James Freeman has turned his love for coffee and $15,000 of credit card debt into a $700 million company with cafes in the US, Japan, and Korea. The lesson: investing in an idea you believe in can result in a big pay off.

In 2014, Justin Mares embarked on an entrepreneurial journey in an unorthodox way; he started and promoted a website for a product he hadn’t developed yet. Fortunately, as orders began pouring in, this technique validated his observation that the health benefits of bone broth had become increasingly sought-after; there wasn’t a commercial market established to satisfy the demand. Because Mares identified the lack of supply available, he was able to fulfill the demand and rapidly grow his company.

It’s hard to believe that Whole Foods Market, the natural grocery store valued at roughly $13.7 billion before their sale to Amazon, started in a small store in Austin, Texas. But in 1978, John Mackey and Rene Lawson Hardy opened what was then “Saferway” and, despite struggling with homelessness and eviction, built the business of their dreams.

Born out of a frustration with the lack of transparency in the beauty industry and a battle with skin problems of her own, Priscilla Tsai quit her high-paying job to start her own line of clean skincare products with little experience. This paid off — Cocokind is now sold in Target stores and all Whole Foods Market locations with no end to their growth in sight.

Roxanne Quimby and Burt Shavitz started Burt’s Bees with nothing more than a little extra beeswax and $200 they had earned at a junior high craft fair. Within their first year, Quimby and Shavitz had turned their $200 investment into $20,000. Burt’s Bees continued to gain popularity and was sold to the Clorox Company for $925 million.

This popular health and wellness resource was founded by Alexa Brue and Melisse Gelula, two journalists who recognized the opportunity to fill a hole in the market and create the health and wellness media platform Well + Good. It wasn’t an instant success; however, being one of the first companies of their kind, Brue and Gelula had to develop a steady, reliable stream of content to build their audience to the 5-million-a-month readership they boast today.

Started by Craig Newmark as a platform to communicate about local events after he moved to San Francisco. Craigslist is now a wildly popular classifieds page that is used worldwide, though it was never intended to be. The lesson: sometimes, the greatest ideas are born out of a need for convenience and accessibility.

The popular ecommerce website began as a free site called AuctionWeb, which was developed by Pierre Omidyar as a side project to provide a platform for the auctioning of goods. When Omidyar’s internet service provider notified him that he would have to start paying more to accommodate the traffic of his popular auctioning website, he started charging users, and eBay was born. Like Craig Newmark, Pierre Omidyar created a platform that served his needs that weren’t being met by another party, which allowed his creation to expand and serve others as well.

The original mission of the extremely successful company Amazon was to sell books online. However, their growth-at-all-costs strategy drove this ecommerce business into the most popular destination for online shopping worldwide. Started in the garage of founder and CEO Jeff Bezos, Amazon is now the largest company in the world and Bezos, the richest person in the world.

Founders Bert and John Jacobs of Life is Good started with one tee shirt design in 1989. The business began with the pair selling tee shirts out of their trunk in Boston and along the east coast. It wasn’t until Bert and John decided to create 48 copies of their original design of “Jake,” the smiling stick figure drawing, that the business took off. Today, Life is Good is a $100 million company.

Yvon Chouinard was a rock climber living in Burbank, California, when he decided to take up blacksmithing in order to make his own pitons. As Chouinard started his handmade climbing supports for $1.50 each, word got out, and he parlayed his hobby into a business that eventually grew into the hugely successful outdoor clothing and equipment business Patagonia.

Under Armour, the heat optimizing clothing brand, was started with $20,000 and an additional $40,000 in credit card debt by Kevin Plank. This creative entrepreneur marketed his signature clothing into a landmark deal with Georgia Tech University that parlayed into Under Armour being sold to two dozen NFL teams. Today, Under Armour is a $2 billion company with thousands of employees.

Started out of a spare bedroom by Steve Conine and Niraj Sha, Wayfair was developed out of a demand for stereo stands and racks online. This single website grew into 250 standalone websites, growing into the largest ecommerce destination for home furnishings globally. In 2011, the pair reassessed and consolidated all of the sites into one and named it Wayfair. The home furnishings giant has reportedly generated $13 billion in net revenue in the last fiscal year.

Founded by Ingvar Kamprad at age 17, the successful blue-and-yellow furniture store began as a small shop on the street of Sweden and was named as an homage to his roots. IKEA’s mission was to provide good design and functionality at low prices, which is true to this day. Eventually, the business progressed to incorporate their signature flat packing furniture, another groundbreaking development, and grew into the biggest furniture retailer today, valuing over $58.7 billion.

BizChair, an online wholesale furniture retailer, was started by Sean Belnick with only $400 and 50 pieces of furniture as inventory. Today, BizChair has grown to house 25,000 products online and boasts a staff of 75 to accommodate a list of impressive clients such as Google and Microsoft.

These successful businesses come from different backgrounds and experiences, but they have a few things in common; they identified an opportunity to fulfill the demand of a market that was not yet saturated and used creative thinking to overcome roadblocks along the way. These commonalities (and a lot of hard work) allowed these inspiring entrepreneurs to create successful businesses with little money or experience.

Start a Business in Your State

How to Form an LLC

How to Start a Business