An S corporation (S Corp), Subchapter S corporation under the IRS code, is not taxed at the business level because it is a pass-through tax status for federal, state, and local income taxes.

The S corp income passes through to the owner's individual tax return as salary and distributions. The owner's salary pays employment taxes and income tax, while distributions only pay income tax at the shareholder level, which leads to S corp tax savings.

Our S Corp Tax Rate guide explains how S corp taxes work and how to determine if an S corp is right for your business.

Recommended: If you’re a business owner making at least $60,000 in earnings with $20,000 in annual distributions looking for tax savings, let ZenBusiness start your S corp and start growing your busness today. 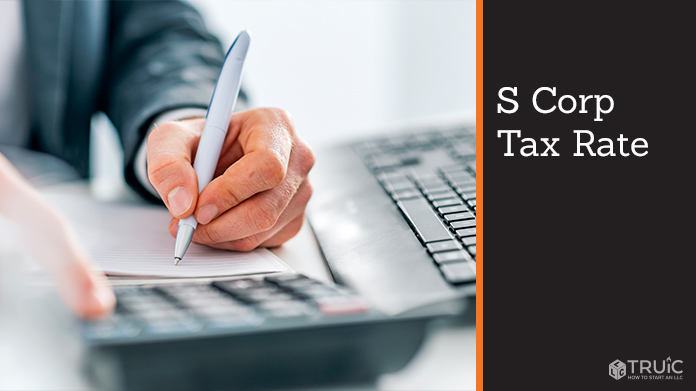 An S corporation (S corp) is a tax structure under Subchapter S of the IRS (Internal Revenue Service) for federal, state, and local income tax purposes that is elected by either an LLC or a corporation.

S corps are not taxed at the business level so there is no double taxation as in a C corporation. In an S corp, business owners are salaried employees with a “reasonable” salary (based on market compensation for industry, position, and experience) where the owners pay only on their salary the following taxes:

By only paying income tax on distributions, an S corp saves the business owner(s) money on self-employment taxes under the right circumstances.

However, to ensure that a business owner’s salary is reasonable, the IRS places closer attention to businesses that elect the S corp tax status. There are also other requirements the IRS imposes on an S corp. Some of these include a maximum of 100 shareholders, who can only be U.S. citizens and permanent resident aliens to participate, among other restrictions.

In contrast to an S corp:

Since S corp income isn’t taxed at the business level, it passes through to the owner’s individual tax return. As a result, there isn't a specific tax rate for an S corp like there is for a corporation. Instead, S corps are only subject to:

The owner(s) of an S corp are considered employees for tax purposes. This means that income from the S corp in the form of reasonable salaries and distributions passes through to the owner-employee’s individual income tax return.

Like any other employee, an S corp owner must pay federal and state income taxes. S corp owners also must pay their employee portion of FICA taxes on their reasonable salary and the S Corp itself pays the other half (which can be written off as a business expense).

FICA taxes cover Medicare and Social Security tax that all employees must pay. Employers and employees split this tax 50/50.

Because the owners of an S corp are considered employees, they don’t have to pay self-employment tax (full FICA tax) on their salary.

Distributions are only subject to state and federal income tax.

When to Elect S Corp Status for an LLC

The following criteria determine whether electing the S corp tax classification makes sense for an LLC:

The following are S corp requirements and restrictions for eligibility to elect this type of tax status for your business:

If an LLC elects S corp, the LLC’s owners become employees of the company. Under IRS rules, owner-employees must be paid a reasonable salary – that is, a salary that someone doing the same job would normally earn. The IRS looks to make sure that the S corp is paying its owners reasonable salaries. If a company fails to do so, it may be denied S corp status, have to pay a fine, and/or be required to pay back taxes.

To determine a reasonable salary for your position, you can compare similar salaries on websites like Glassdoor or the US Bureau of Labor Statistics.

After electing S corp status, an LLC owner uses profits to pay salaries and distributions to owner-employees. The business must make at least $60,000 in earnings, be able to cover a reasonable salary, and have at least $20,000 in annual distributions for the S corp election to make financial sense.

If an LLC owner forfeits a salary, he or she could be fined by the IRS.

Although the IRS charges minimal filing fees to elect S corp status, there are additional bookkeeping and payroll costs that can be expensive. Some LLCs already have employees and payroll costs, in which case this isn’t really a factor in deciding whether to elect S corp.
Because of the added administrative costs, the tax advantages of electing the S corp classification must be substantial enough to more than cover them for the election to make sense. Generally speaking, a reasonable salary plus $20,000 in annual distributions is often enough to save money on your tax return.

For help choosing payroll and accounting services, see our review of the Best Payroll Software for Small Business.

Are you looking for the right business structure for your small business? Visit our How to Choose a Business Structure guide.

Electing S corp status allows LLC owners to be taxed as employees of the business. This allows owners to pay less in self-employment taxes and contribute pre-tax dollars to 401k and health insurance premiums.

Our calculator will estimate whether electing S corp will result in a tax win for your business. Before using the calculator, you will need to:

As a Sole Proprietorship or Single-Member LLC

Savings on Self Employment Taxes

Against this savings, you have to balance the time and costs of running payroll and tax withholding. To learn more about what this will cost, get a free tax consultation.

Save yourself the hassle, and hire a professional service provider like ZenBusiness for all your S corporation needs. Connect with ZenBusiness to start your S corp today.

How to Start an S Corp

You can start an S corp by electing S corp tax status from the IRS on Form 2553 for:

For detailed, step-by-step instructions for starting an S corp in your state, choose your state:

This depends on how much the company makes. As a general rule of thumb, it only makes sense to file taxes as an S corp if there is enough net profit to pay owners a reasonable salary and at least $20,000 in annual distributions.

Check out our LLC Tax Guide, and read more about the similarities and differences between LLCs and S Corps in our LLC vs S Corp guide.

What is the S corp tax rate?

The S corp doesn’t have a specific tax rate because S corp income passes through to the owner’s individual tax return. At that point, the S corp income is subject to federal, state, and FICA taxes based on the individual owner’s tax bracket and filing status.

Does an S corp have limited liability protection?

For more information, see our What is an S Corporation?

Where can I find S corp tax return forms?

You can find the PDF IRS tax returns forms in our S Corp Tax Returns guide.

Is subchapter S the same thing as an S corp?

Yes, subchapter S is the same thing as an S corp. For more information, see our What is an S Corporation guide.

How an S Corp is taxed?

An S corp is a pass-through tax status. The S corp isn’t taxed on its profit. Instead, the profit passes through to the owner's individual tax returns. An S corp does have to pay employer FICA taxes on employee salaries. For more information, see our S Corp Taxes guide.

Does an S corp have to file taxes?

Which is better for taxes, an LLC or an S corp?

For more information, see our LLC vs. S Corp guide.

Yes, S corp income passes through to the owner’s individual tax returns and is subject to state income taxes.

Does an S corp owner have to take a salary?

Yes, an S corp owner must take a reasonable salary per IRS guidelines. Reasonable is defined as being a fair market salary for the work performed.

For more information, see our What is an S Corporation guide.